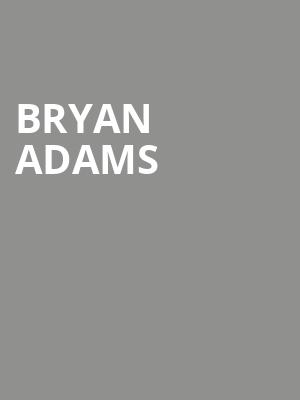 Despite his sharp black suit and slicked-back hair, he's good old Bryan from the block - until he pits his raspy sincerity against a massive hook and produces classic-rock gold.

The so happy it hurts TouR Hits us Shores!

As we all know, Bryan Adams bought his first real six string in the summer of '69. And although his first band didn't get too far (Jody got married), he's gone on to find worldwide fame and fortune, and is undoubtedly one of Canada's finest exports.

Canadian Rock legend Bryan Adams returns with his brand new offering, So Happy It Hurts. The So Happy It Hurts Tour will be showcasing Adams' whopping 15th studio album and will see the see this mega-star head out across the globe bringing his multi-award-winning hits to his adoring fans. Don't miss a thing when Adams comes to town this year!

Bryan first rose to international prominence with the double-whammy of the albums Cuts Like a Knife and Reckless in 1983 and 84 respectively. They sold around 15 million copies worldwide combined and spawned the hits 'Run to You', 'Summer of 69' and 'Straight from the Heart'. His next world conquering moment came with the sweeping ballad '(Everything I Do) I Do it for You'. Written for the Kevin Costner movie Robin Hood: Prince of Thieves, it hit number one is just about every country in the world, including the UK, where it spent an incredible sixteen weeks at the top of the charts.

I first saw Bryan Adans 30 years ago , when his material was new and fresh.... more

Loved the show. What can you say bad about Bryan Adams. more

Sound good to you? Share this page on social media and let your friends know about Bryan Adams at Budweiser Gardens.