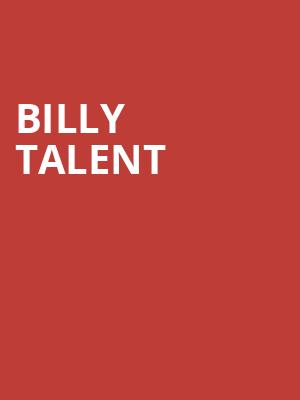 The band are certified platinum in their native Canada, with 5 studio albums under their belt

The Punk Outfit is on the road

Canadian punk-pop-rock quartet Billy Talent first burst onto the scene with their debut eponymous album in 2003, having existed for a decade under the name Pezz. The name change heralded a new sound and era for the band, unveiling a harder, more aggressive sound that went down like a storm with fans and critics alike.

Known for a live show that's explosive as their sound, Billy Talent aren't afraid to get political and have done so unabashedly. Underlying their outspoken views on current world events and bureaucracy are their custom heavy riffs and frontman Benjamin Kowalewicz gravel-edged, distinctive vocals. Don't forget to wear comfortable shoes, there's bound to be a mosh pit or three in a Billy Talent crowd!

Photo by Blake Carpenter on Unsplash

Sound good to you? Share this page on social media and let your friends know about Billy Talent at Budweiser Gardens.